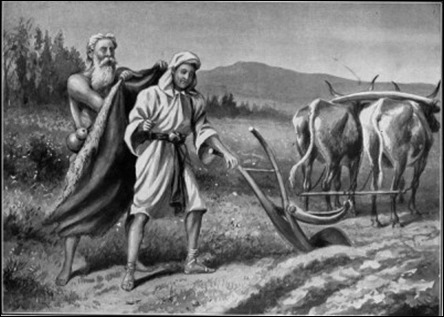 Elisha was a farmer. By all accounts, he was just an ordinary man. He may well have been from a wealthy farming family, but still he worked the field.  When Elijah threw his mantle (cloak) on him, he anointed him into his calling as a prophet. An extraordinary calling on an ordinary farm boy.

Little did he know what lay ahead of him, however God had already given Elijah the heads up on what was to become of this young man. He would be instrumental in bringing Israel back to God!
Elijah was getting tired of being on the run, always the bearer of bad news to a disobedient generation. He had become so discouraged that told God he wanted to die. Simply, he'd had enough! (1Kings 19:1-8)  But God wasn't finished with him yet. He still had more for Elijah to do before he was ready to take this faithful servant home. Elijah was to find, anoint and train up his successor.

When I read the chapter of 1Kings 19, I am reminded that God is faithful to His own. He sees our needs, He feels our pains, and he sends angels to minister to us in our times of distress . I am also
reminded that God's plan is on-going. It doesn't finish with the end of my ministry, but He continues the work He has begun through me to the next generation. I am convinced that when Elijah laid down under the juniper tree; waiting and praying for death, that neither he nor Elisha had an inkling  of an idea that Elisha would be Elijah's successor. But God sent His angels to minister to Elijah in his distress. When he awoke, there was food (fresh baked bread) and water waiting for him. The Angel touched him and said :"Arise and eat". This wasn't a last meal, this was sustenance for the journey ahead. But Elijah wasn't ready, and God wasn't pushing him. As Elijah slept, God
sent along another serving of food. More bread and water. But look at the miracle here: not only was Elijah encouraged enough to take up the journey God called him to, but the food he ate and the water he drank was enough to sustain him for a 40 day journey:

1 Kings 19:8 "So he arose and ate and drank, and went in the strength of that food forty days and nights to Horeb, the mount of God."

ELIJAH WALKED 200 MILES ON 2 LOAVES OF BREAD AND 2 JUGS OF WATER! And still God wasn't finished with him. The next story is the account of the gentle presence of a loving God in the whisper of a breeze. And here He instructs the faithful servant of The Lord to go and anoint a
farm boy to take over where he would leave off.

You know, sometimes when we are faithfully following the call of God on our lives, it can be a real struggle. Elijah was running for his life from a queen who was hell-bent on killing him. And he took his eye off the answer and saw only the problem. You and I are not alone in our struggle to remain faithful to our call in the face of adversity. Sometimes it's difficult to see God's plan when we are on
the run from people with a mind set on our destruction. But God isn't finished, and as he ministers to us in our hour of need, He reveals Himself to us once again, and sends the right people at the right time.

Are you in need of a simple farm boy?

When I look at what occurs next again I am reminded of the  "Godness" of God. Only He could see far enough ahead to know that what Elijah needed most was not a top-of-the-class graduate from Prophet school, but a young man, a fit and a hard worker who was willing to leave behind the life that he knew for the adventure that lay ahead of him.

As Elijah stands at the front of the cave on the mountain in the presence of God, he receives 3 instructions and a word of comfort: Go back and anoint a new king over Syria; anoint a new king over Israel; and anoint your successor. And: You are not alone, I have preserved 7000 faithful servants who are going to help you clean up this nation and bring them back to me!

You are not alone! How comforting is it that just when you think that you are the last man standing for the cause, God  reminds you that you are not alone. Over the years I have found it particularly comforting, that just when I have felt that there don't seem to be so many believers out there,  God brings me to a church, or a meeting or a great Christian Festival like the great Australian Easterfest, where all of a sudden I am in a throng of sometimes thousands of people who live and love and believe in exactly the same things I do!  These events are great encouragers to both me and my family, and many of the young people we have taken with us over the years. You are not alone!

And that brings us back to the young Farm boy. I say boy, but I actually have no idea how old he actually was when Elijah went to him as he was ploughing the field with his yoke of oxen, and threw his cloak around him as a symbol of God's call to the ministry.  I imagine he was quite young because he was not married, and he was still living with his mother and Father. His response tells me a few things: He asked permission to return to his parents to kiss them goodbye.  He had to finish up this chapter in his life. As Elisha turned to say his goodbyes, Elijah charged him not to forget his calling.

How many times do we put God on hold in order to finish something we have started, and get totally side tracked, forgetting about what God has called us to in the first place? Elisha not only kissed his parents goodbye, he also cut himself off from his past, so that he could not come home when things got tough. The Bible says he took his yoke of oxen, slaughtered them and in a final act of generosity he chopped up his equipment, made a bonfire and had a big BBQ farewell dinner for all the folk in his
neighbourhood. He then went with Elijah and started his apprenticeship.

It's important to remember that when God calls you to ministry, you often have to go through a period of training. Elisha's training under Elijah lasted a number of years before he actually took over from the great prophet.

Ordinary people...
You know, God prides himself in using ordinary people to achieve extraordinary things.
Gideon was a farm boy who led a nation to victory against the Philistines.
Moses, the son of a slave woman became the Pharaohs right hand man and later led a nation to freedom from bondage.
Jesus called 12 ordinary people, fishermen mainly to build His church.
You, too are called to great things in Christ!
Are you listening? Are you ready?
Have a great week!

Posted by Aussie Worship Leader at 10:52 No comments: